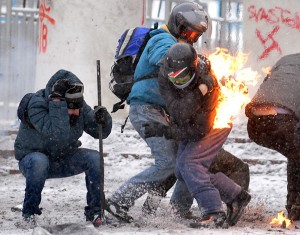 TOPSHOTS
Protesters clash with the police in the center of Kiev on January 22, 2014. Ukrainian police on Wednesday stormed protesters’ barricades in Kiev as violent clashes erupted and activists said that one person had been shot dead by the security forces. Total of two activists shot dead during clashing. The move by police increased tensions to a new peak after two months of protests over President Viktor Yanukovych’s failure to sign a deal for closer ties with the EU. AFP PHOTO/ SERGEI SUPINSKY